A viewer of the Valley Today show asked reporter Abby Furchner if I’d share more recipes from yesterday’s Christmas Treats Segments. So here’s the recipe for the brownies I used for the Christmas trees. I wish I wrote down where I found this recipe, but as usual, I did not. I found it somewhere online, scribbled it down, tried it, and liked it so it went in the recipe box! It is not one I created. So, here goes! 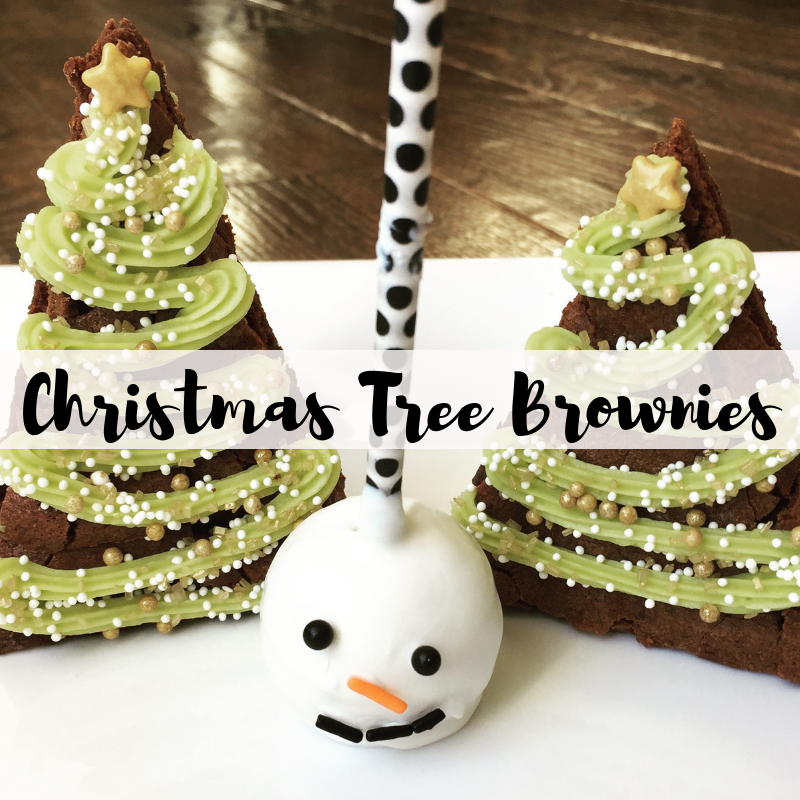 For the first time in several years, and only about the second in both my kids’ lifetime, we stayed home over the Christmas/New Year break this year.  As the last night of our break comes to a close, I’m enjoying refelecting on the last two weeks at HOME.  I sat down for a little bit several times during the break with great plans to blog about all we were doing.  But we were too busy having family fun to get much blogging done.  So here I am on January 2, 2016, sharing with you a few of my favorite moments of the last two weeks of 2015. 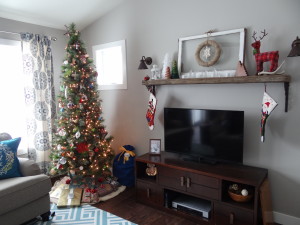 Hubs hung our mantle just before Christmas.  It came to us from his dad.  It was the mantle in the home he built that Hubs grew up in but it was originally a bridge tie from the dam in front of their house.  That’s a mouthful, I know, long story short it’s been reclaimed twice and is loving it’s third life in our new home. 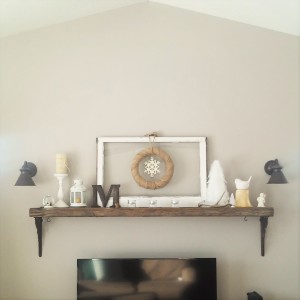 The window resting on the mantle was also reclaimed from Hubs’ grandmother’s house.  The above is what it looks like now after taking down the Christmas décor. 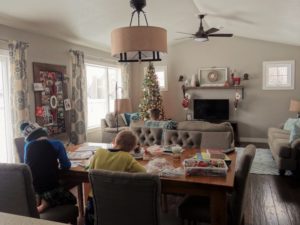 By the way, this is usually what our table looks like.  There’s always some kind of project going on we just push to the side to make room for food.  And by project I really just mean several large piles of homeless things. 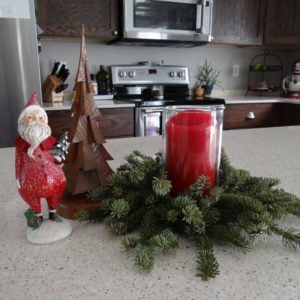 This little scene just made me happy as I baked around it through the holidays.  Especially that little old Santa.  How cute is he?! 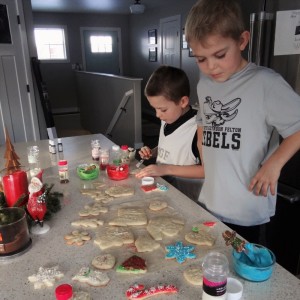 Getting messy with sugar cookies.  I baked A LOT before the break and decorated my share of pretty ones, but the boys’ cookies were just more fun. 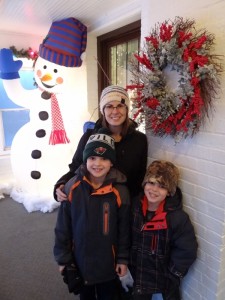 Outside of Santa’s village just before telling the big guy what we wanted for Christmas.  This is one our favorite traditions.  Afterward we drove through the park to look at the big lights on display.  Then we ate at our favorite Chinese buffet.  Because, you know, that’s what you do two days before Christmas, right?!? 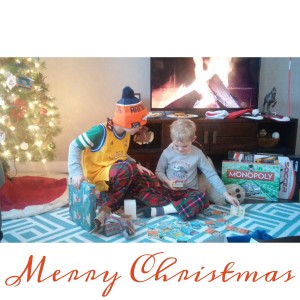 On Christmas morning we filled two hats each with our four names and drew a name out of each.  The first was the person who got to choose a gift from under the tree, the second was the person who’s name would be on the gift and would get to unwrap it.  This made for an exciting and SLOW gift unwrapping experience.  The mess on the floor at the end of the morning was glorious!  I know there’s a current trend against over-giving, but I’ve found myself saying “Thanks but no thanks” to that.  I say “No” to my kids all. year. long.  Christmas and birthdays are a time I get to spoil them.  And I do!  (As much as Hubs will let me.) 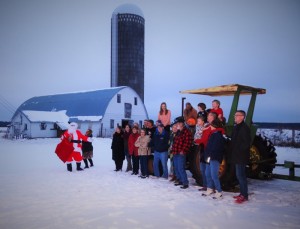 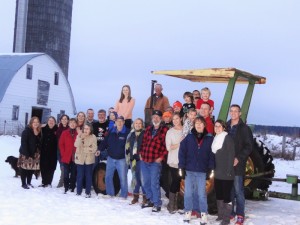 After opening all our family gifts and munching on breakfast, we packed up and went to Hubs’ grandparents for Christmas at the Farm.  Here we are with his extended family. From now on if there’s a tractor and a silo in our pictures from Christmas then I think we’re doing it right. 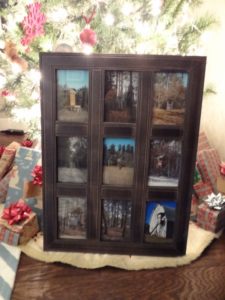 This is one of the handmade gifts we gave this year.  Hubs read in the newspaper last year about a photographer who took pictures of different deer stands. The differences between them, in a structure as simple as a deer stand, were architecturally beautiful.  So we attempted to do our own version in frame for his parents.  Hunting is a big part of his family.  His dad has built countless stands, each one is unique in it’s own right, and each of them hold priceless memories.

Nine of the twelve stands I took pictures of that made it into the frame. 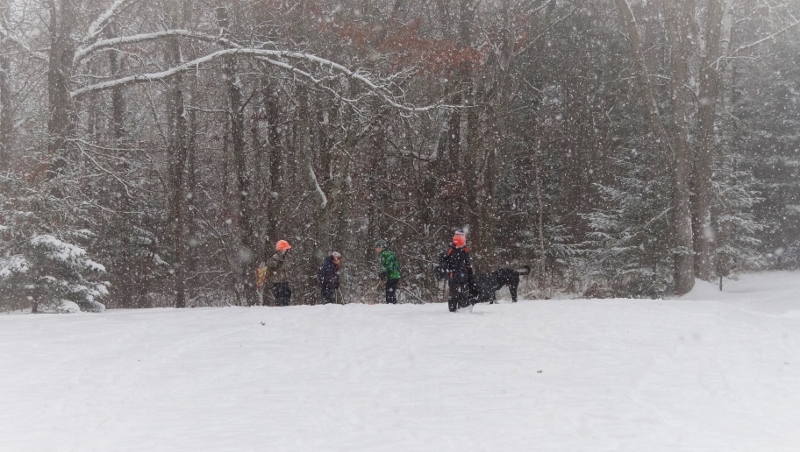 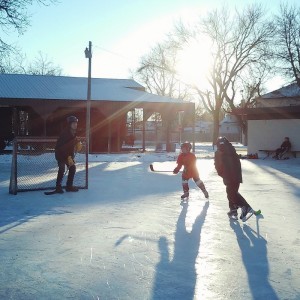 We spent plenty of time outside over the break too.  Sledding – someone I know cheats, I won’t say who but he’s bigger than me – and skating.  I choose to skate in my boots long enough to take pictures and then return to somewhere warm with coffee. 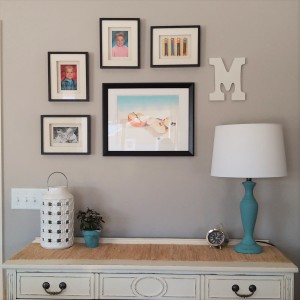 We rang in the new year with new neighbors and I have since been cleaning up Christmas and getting our home refreshed and ready for yet another new season.  For the second year in a row, I didn’t make any resolutions.  The last 18 months, even with it’s lows, has been mostly trending up.  I kind of like the people and the stuff my life is made of and where it’s headed.  I don’t really want that to change.

Actually, there was one change.  On the very first day of the year, I became a GREAT Aunt!  That’s right, at the ripe old age of 33 I am a great aunt.  Brittany made me an aunt at age 7, so it’s not too surprising, I suppose.  I couldn’t help but shed a little tear at the awe and wonder of another beautiful baby girl joining our family as we celebrated the passing of a tough year and the hopes for our future. 2016, I have a feeling, will be full of more GREAT things. 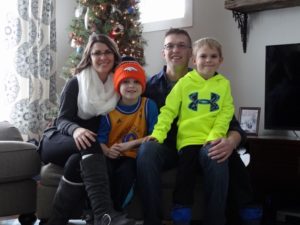 Merry and Bright, With Love and Light,

The world has been a scary place to live recently.  There is too much sadness and not enough empathy.  I don’t watch the news, but we get the newspaper daily and I’m on social media enough that some days what I see just gets me down.  When that happens, I do what I do best; love the people around me and decorate.  We have to create our own joy when there is little to be found.

This past week we took advantage of every possible occasion to celebrate.  We hosted the second annual Friendsgiving within our friend group.  With 7 adults and 12 kids, we had a house full!  It is a joy to host and I’m grateful to have a space to accommodate all those busy bodies.  Table setting is a plus too! 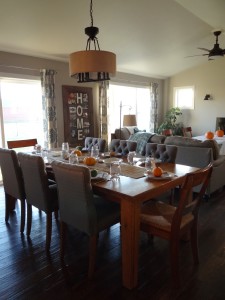 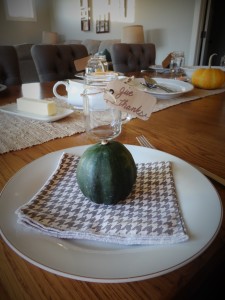 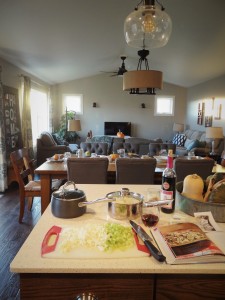 We spent Thanksgiving with the in-laws up north.  The food was simple and delicious as always.  After the meal, the boys watched football, Grandma took the kids to the park, and my sister-in-law and I spent a couple of hours in the woods cutting branches and logs with which to decorate for Christmas.  We brought wine and drank it out of half-empty water bottles we found somewhere in the depths of my back seat.  Wine and hand saws.  What could possibly be not joyful about that?! 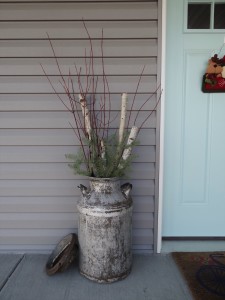 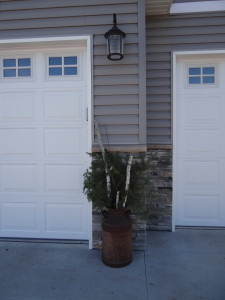 We celebrated Hubs’ birthday with some wonderful friends in their new home.  I made his favorite; a version of black forest cake with chocolate ganache frosting instead of whipped cream.  It was delish!   Our friends bought their first home, an old farmhouse, and have worked so hard to fix it up.  It. is. beautiful!  I’m proud of them and it’s been exciting to watch them through this process.  It’s okay to borrow other people’s joy sometimes too.  (Side note: I should have her photograph their new home and guest blog on here, don’t you think??)

Finally, the boys and I did our annual Christmas decorating while watching The Polar Express and drinking hot cocoa.  Of course, Christmas is my absolute FAVORITE.  It’s such a magical time of year, aesthetically and otherwise and filled with traditions that I hope my boys will carry on and bring them joy for years to come. 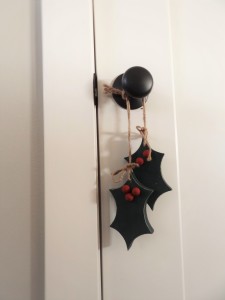 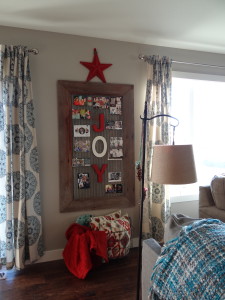 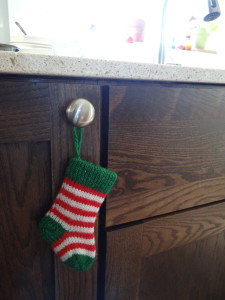