Having summer off has me doing all kinds of crafty things around here. Inspired by a friend who posted a picture of some of her recent string art, I decided to give it a try. The idea was to add to the gallery wall of family photos in our living room. While we were back at the in-laws over the fourth I asked my father-in-law if he had any boards he would let me have. He pulled out a beautiful 4′ long piece of birch harvested from his 80 acre tree farm and roughly milled. And so the project began.

I started by using painters tape to form the letters and moved them around to make sure they were centered. Most projects start by using a paper template for fancier fonts or shapes like state outlines. This simple trick worked perfectly for my first time trying string art. 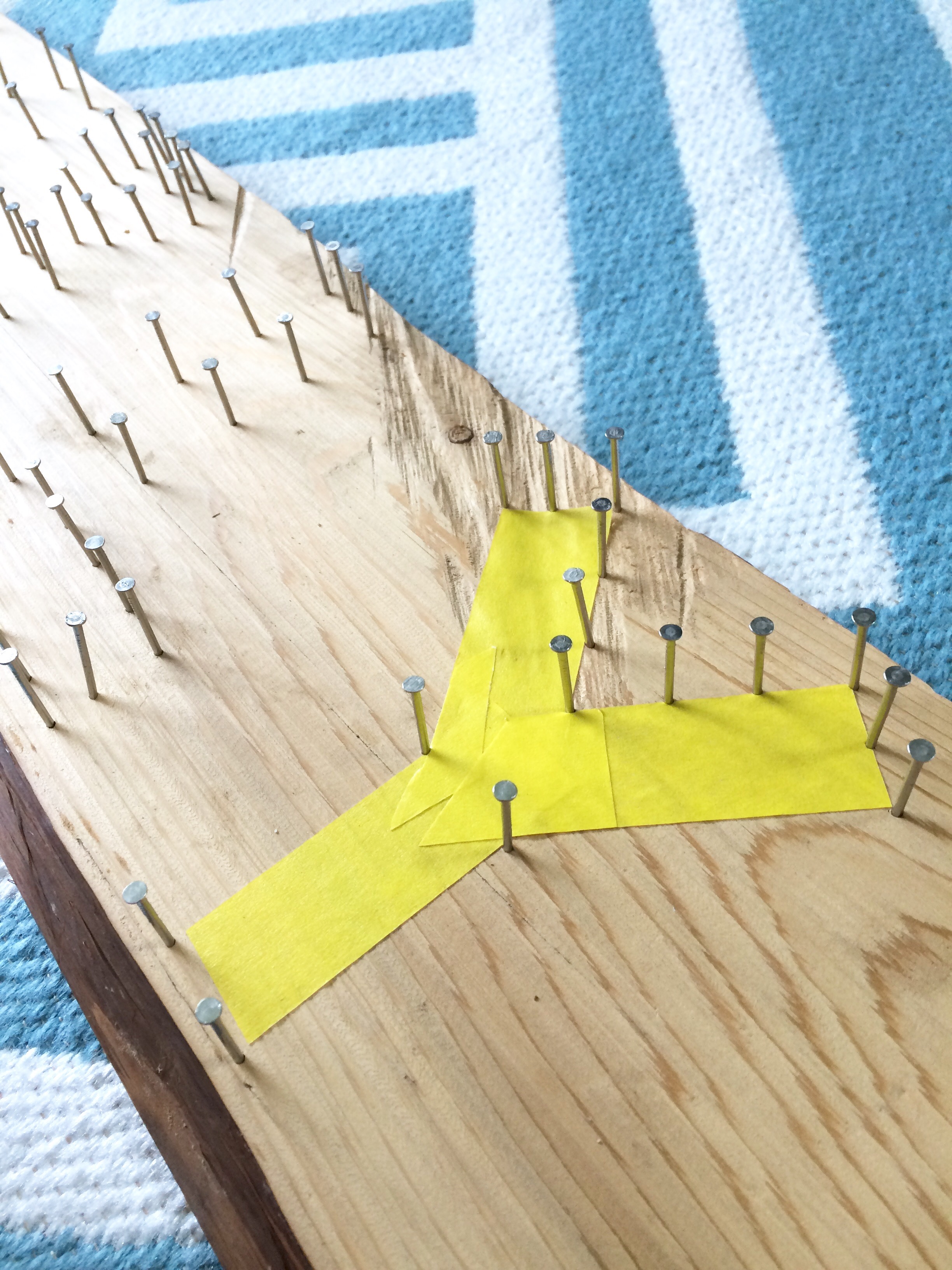 When the letters were in place, I began nailing the nails about a half inch apart around the perimeter of each. I used 1″ 16 gauge, #6 nails (whatever that means) with a bit of head to help keep the string on. I tried to keep them straight but as you can see, some of them leaned a little. I corrected as needed later. Now is when it’s easiest to remove your tape or template. 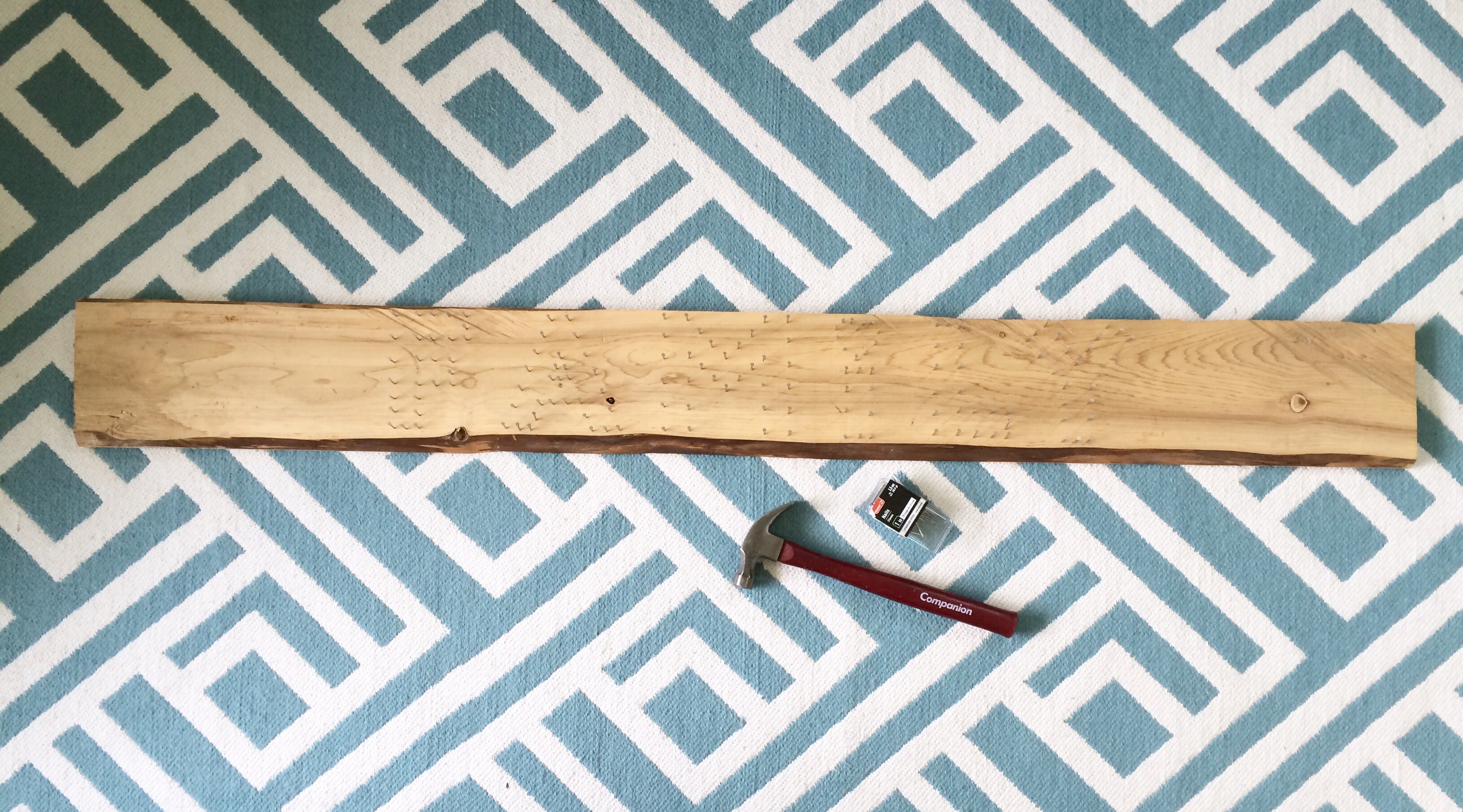 It’s hard to see but the nails are all in. This really didn’t take long, only 10 or 15 mins. Next I grabbed some crochet string I had on hand to start the fun part. 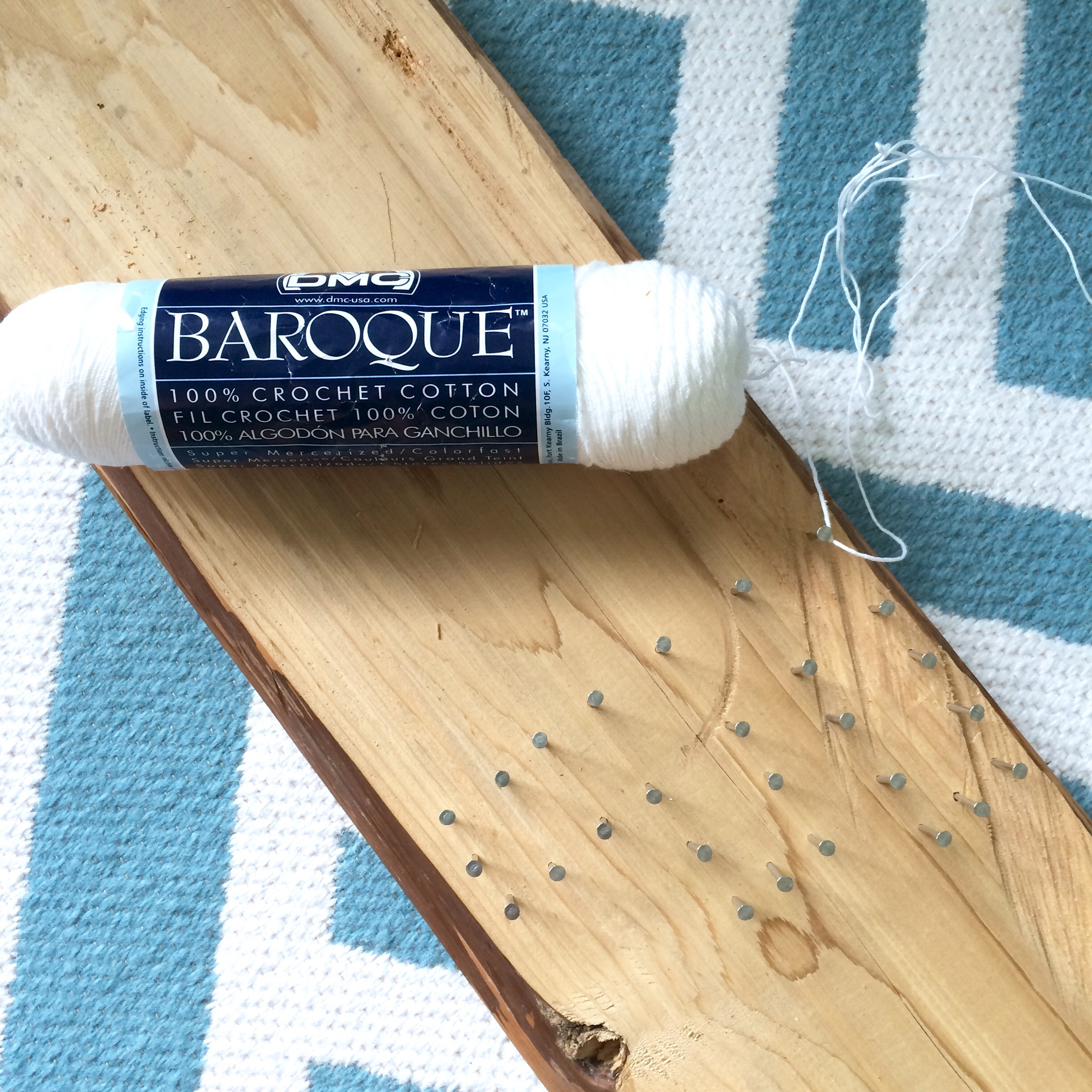 Until this point, I had done zero research on the art of string art. Ha! I did a quick Google search and discovered you can be as methodical or loose about it as you want so, after reading that I was using the “correct” type of string, I went back to winging it. Here’s what I did.

Start by tying the string around a nail. I double knotted it. 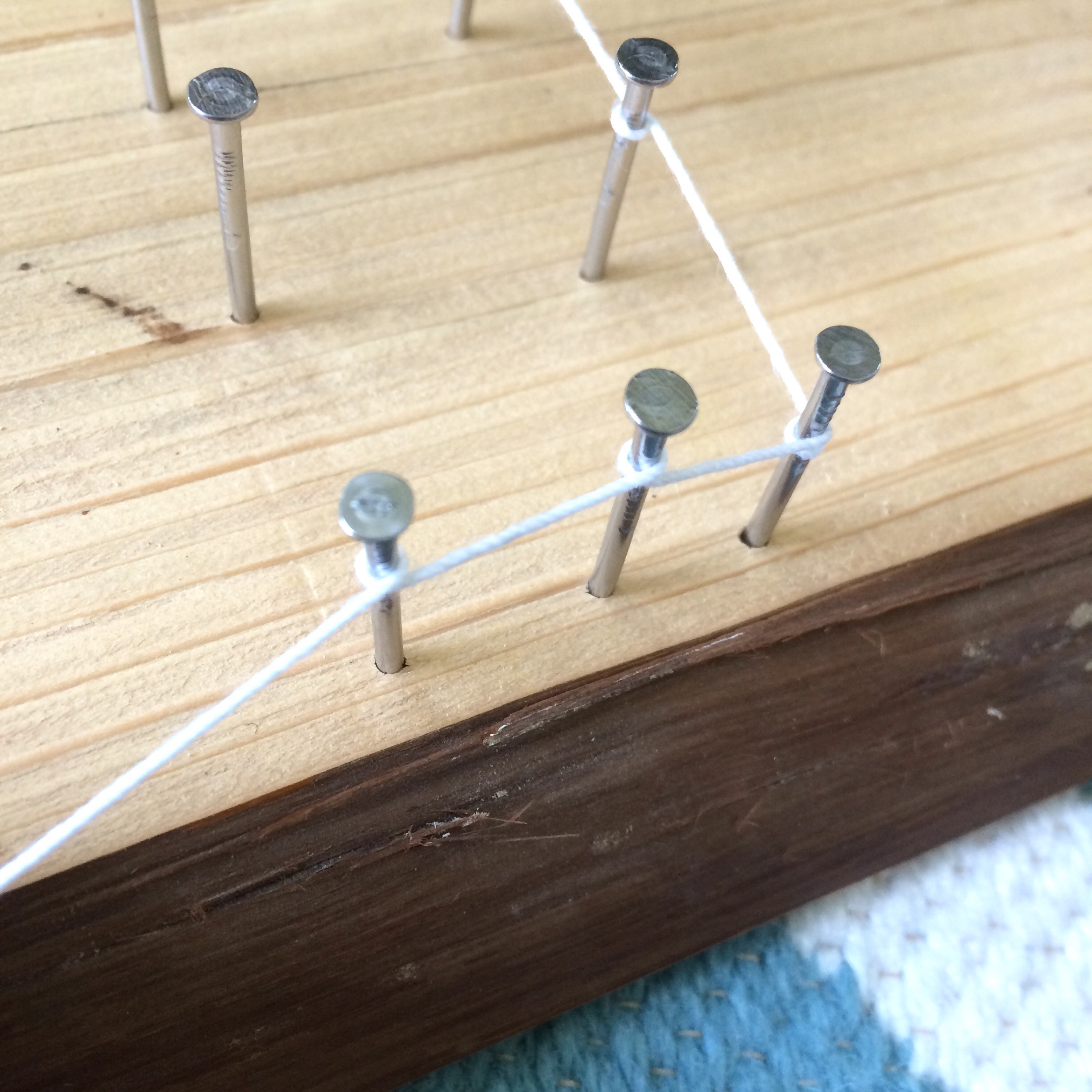 Then go around the perimeter of your design looping around each nail about half way down. This will give you room on the nail above later. I learned that it mattered a little which way I looped around the nail. For the perimeter, I thought it looked best to loop on the outer side. 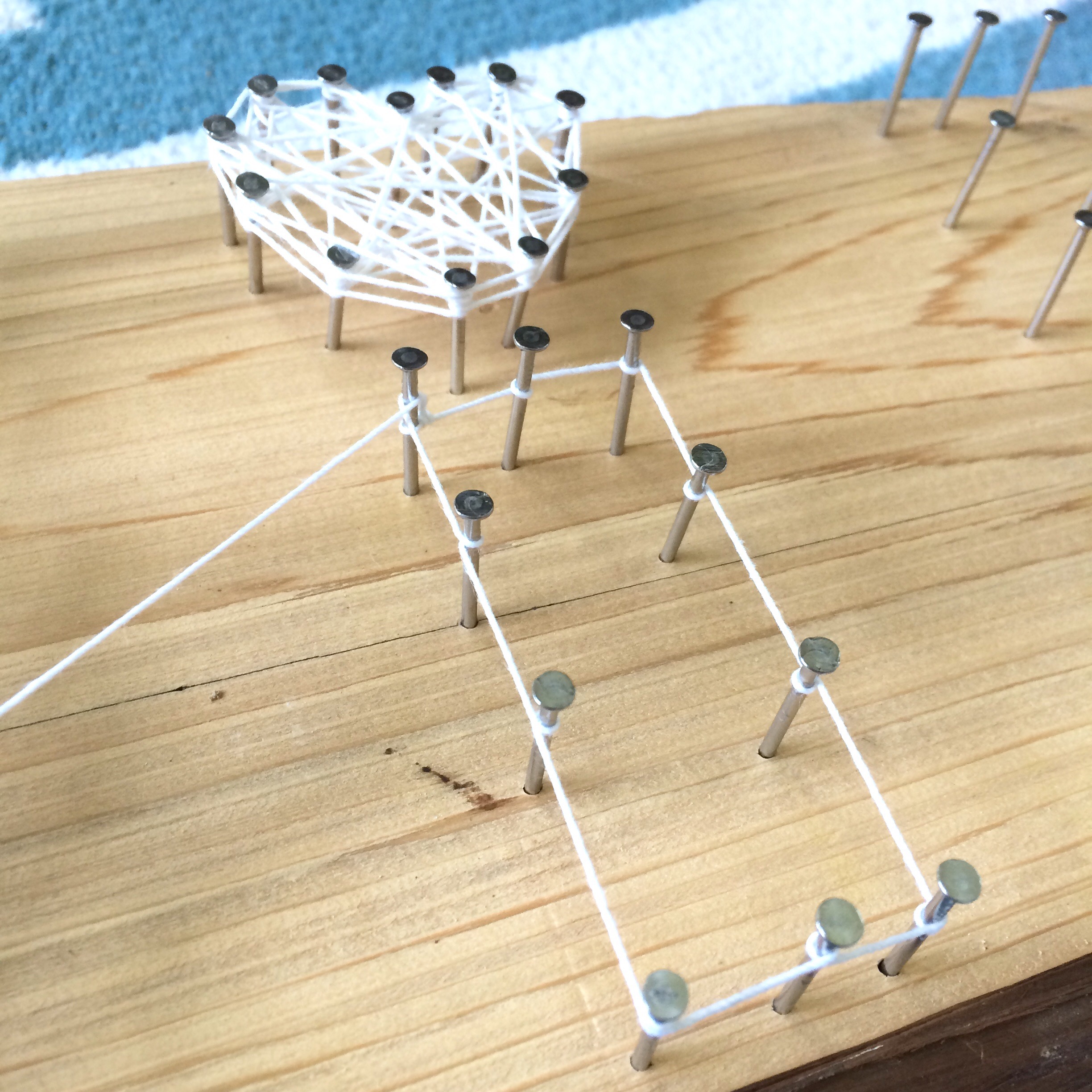 When stringing the inner part, looping on the left side can give a slightly different line than looping from the right side, so you can manipulate the way the lines cross slightly. It’s hard to explain but try it and you’ll see. Or you’ll call me crazy. 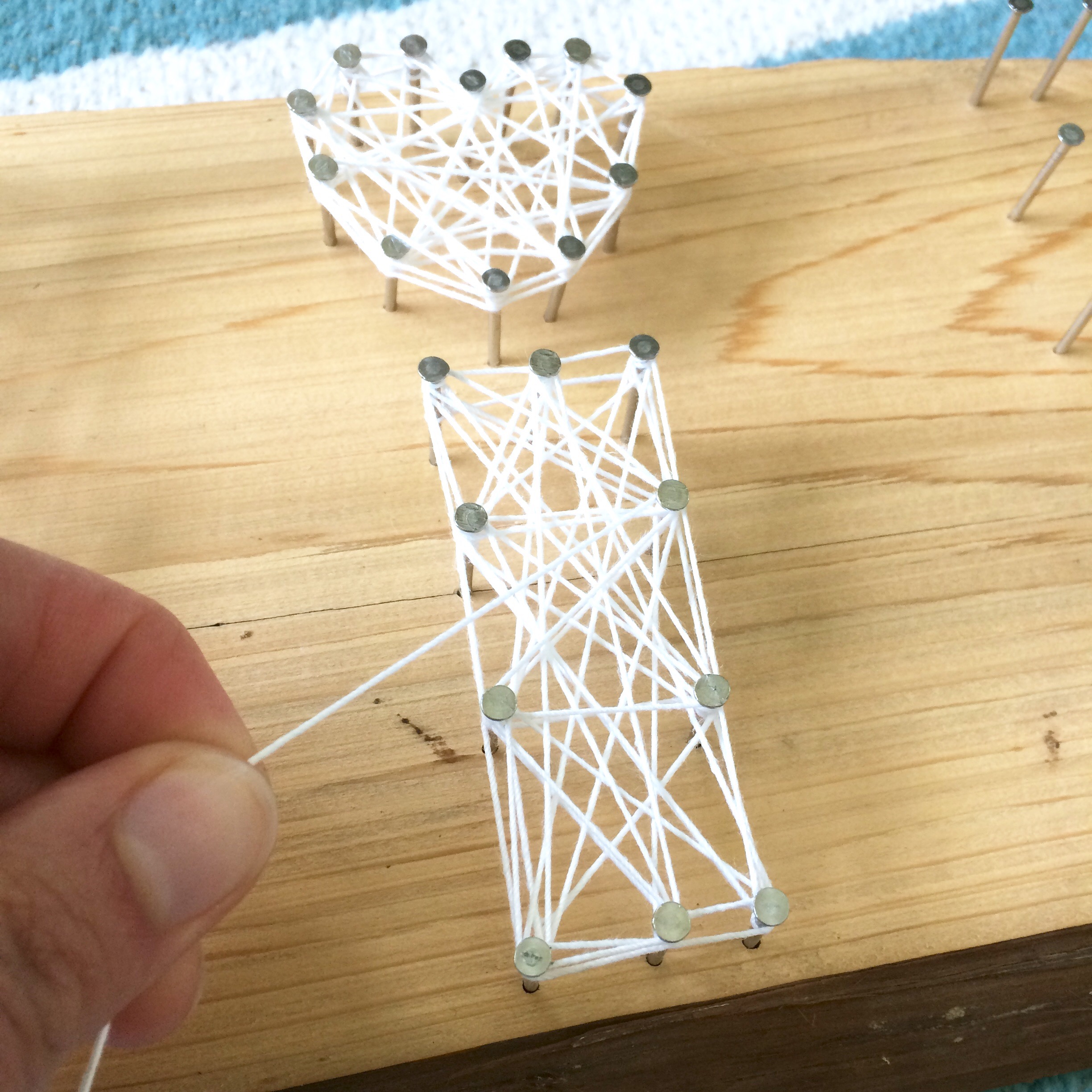 As I was stringing, I did a random pattern trying to get both directions of diagonals and perpendicular lines. I tugged the line slightly, but not so much that it put too much tension on the nails as to make them lean (more). When I did notice a loose or leaning nail, I just hammered down a little more. It’s good to keep the hammer close so you don’t have to let go and have some of your stringing come undone. When it looked full, I went around the perimeter again and then cut and tied off the string. 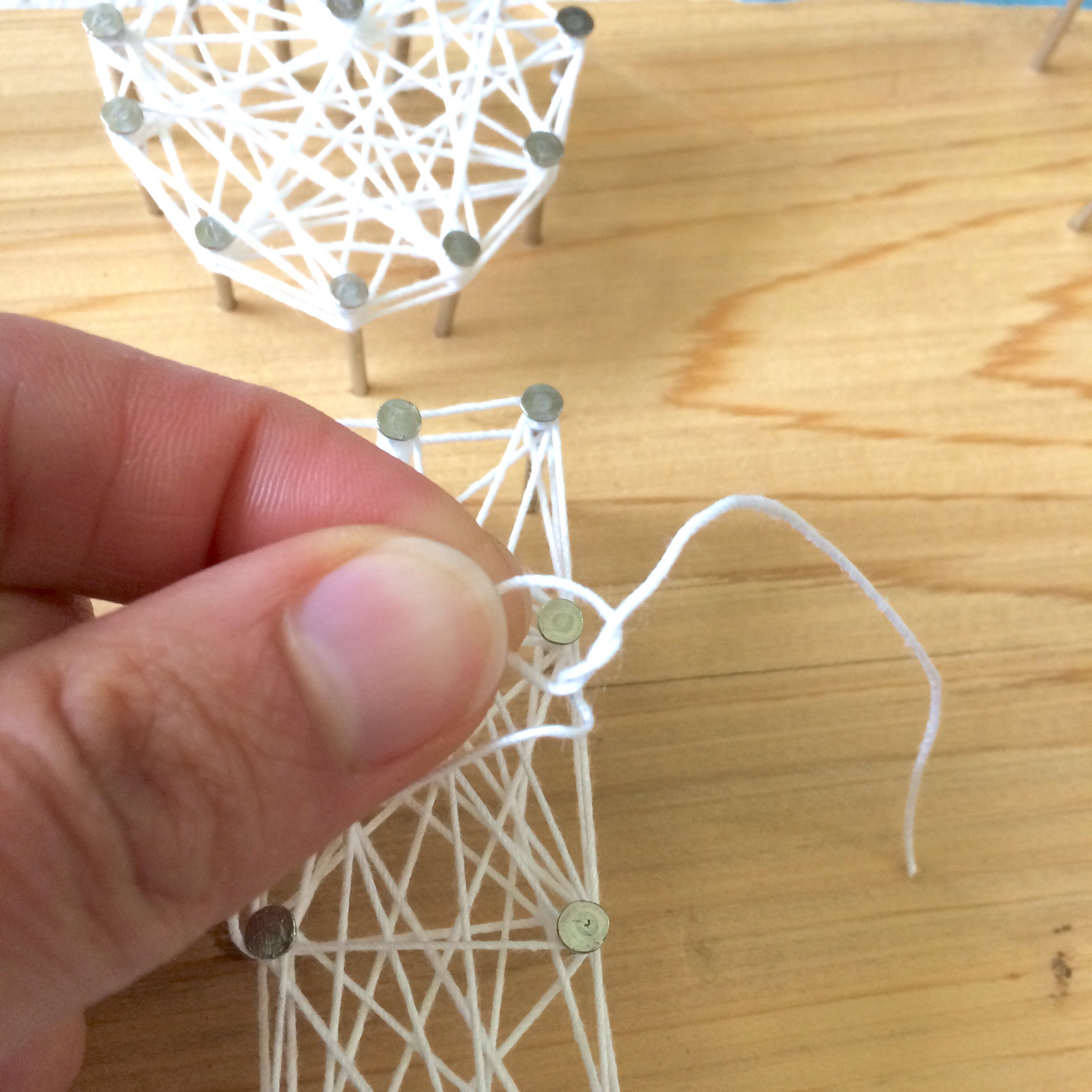 I found it easier to make a loose knot and then loop it around the nail head and pull taught.

Then trim the string close and tuck it under so no bits are hanging out.

At this point I lightly pushed the string up on all the nails to make the overall pattern come together on mostly the same level. 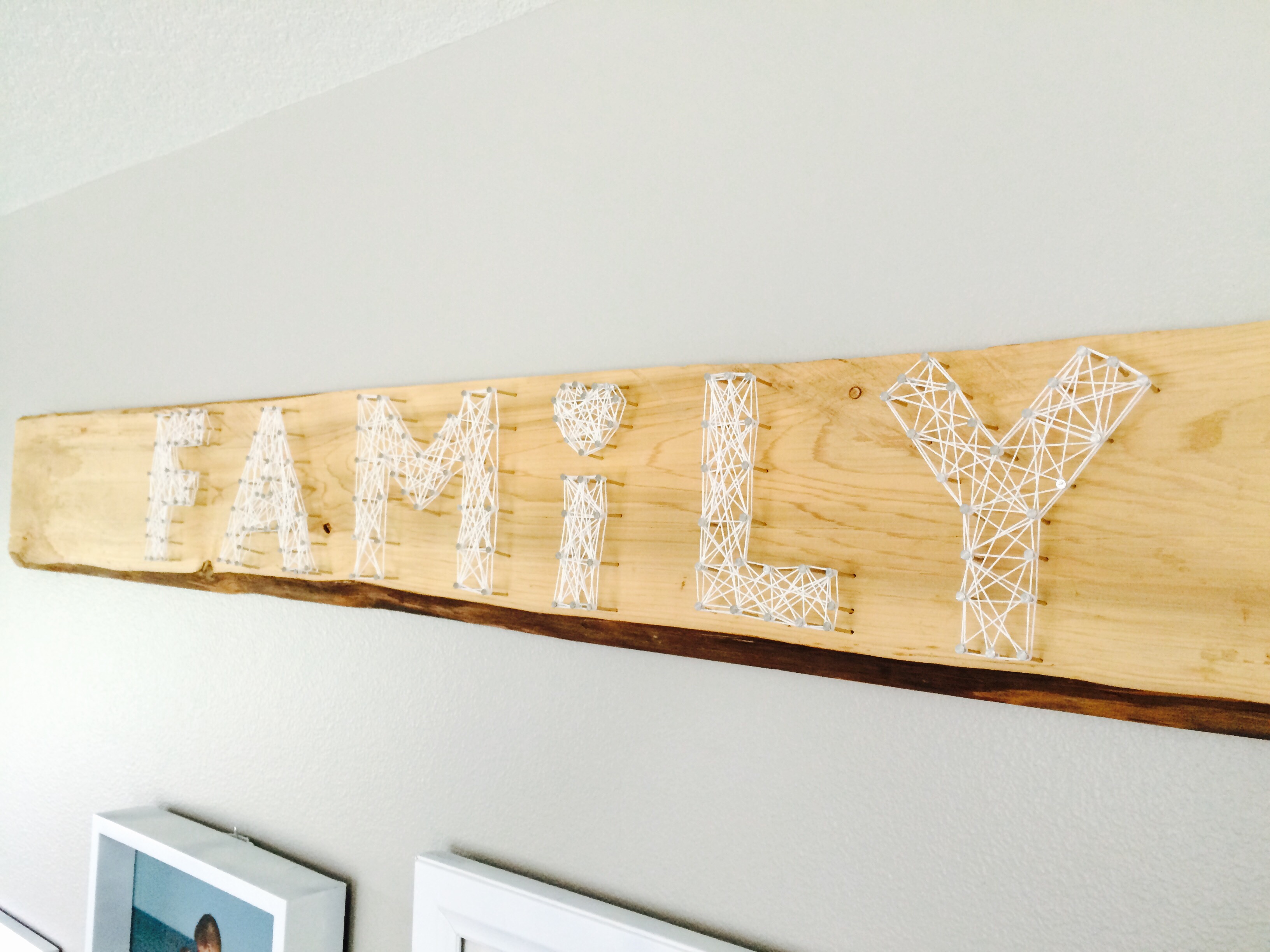 And there you have it! First string art done in one evening, successfully, with little effort. I can’t wait to try it again. My neighbor and I are already planning a summer craft night to do another one. 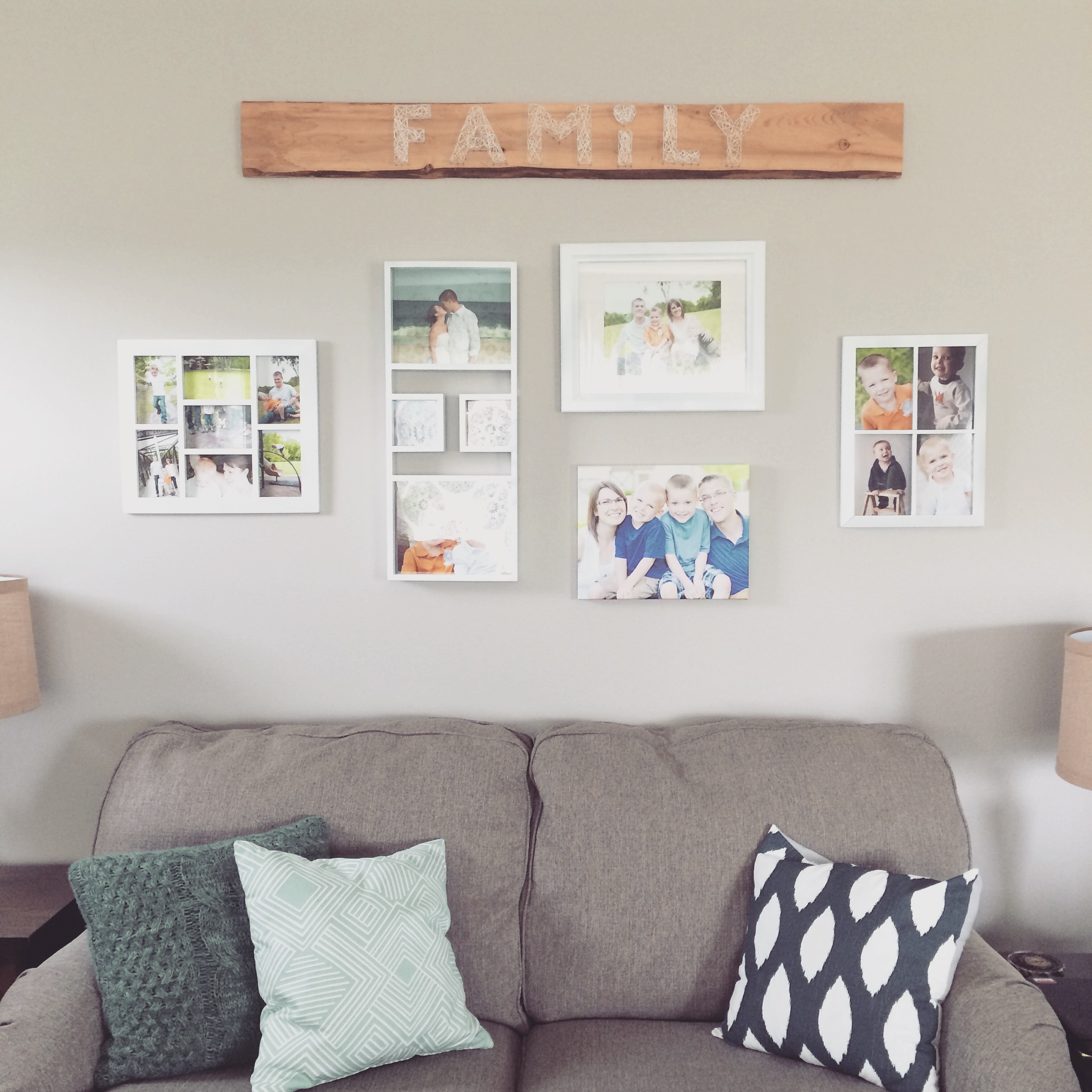 Also, I ended up taking all the glass and pictures out of the frames and painting the frames white (previously espresso brown). One thing always leads to another around here. ☺️