You are here: Home / libbyBLOGS / A Motorcycle and a Bad Knee

When I was 21 in the fall of 2003, I moved from the only home I ever knew in North Carolina all the way to Los Angeles California to go to design school. I didn’t know anyone when I moved there. I started completely from zero. A year later I had made quite a few close friends, had a semi-serious boyfriend with a fancy motorcycle, and a long list of single-twenty-something stories I won’t retell here. Or maybe ever.

My experience in California was everything you might think. It was exciting, expensive, beach-y and smoggy, I spent too many long hours in traffic, and had plenty of encounters with celebrities.

My boyfriend had a Kawasaki Z1000, an oversized crotch rocket. We would ride with a group of his friends, gather with hundreds of other bikers in random parking lots until police helicopters flew over, and go up to Dodger’s stadium and line the curvy hills to watch other bikers do tricks – think standing on handle bars while doing a wheelies. This was just like what you might see in the first minute and a half of an episode of CSI except it was real life.

This part of my life was such a far departure from the timid, anxiety ridden child I had grown up as. I lived like nothing bad could ever happen and participated in plenty of risky behavior. “No regerts.”

One night my boyfriend and I were on “the” 101…or maybe it was “the” 10, I don’t recall…but I remember looking down to see 126 mph on the digital speedometer on his bike. I remember how fast the lights flashed by, the deafening sound of the wind through my helmet, and holding on with all my 110 lb might. By the grace of God we stayed on two wheels that night. But that wouldn’t hold true for long.

Since my family was clear across the country and I wanted to make the most of my time in California, I decided to stay and do summer school after my first year of interior design. As the end of summer session approached I found myself behind in preparing for my Residential Design Thesis project. I had to buckle down and cram over the long Labor Day weekend. On Monday of Labor Day when I could finally see the light at the end of the tunnel on my project, boyfriend took me out for lunch in West Hollywood and then down to Santa Monica for a short ride on the PCH before heading back to my apartment to finish up my thesis.

We were heading eastbound on Sunset Boulevard that afternoon on his bike, with the sun behind us. As we began coming into Hollywood, I remember, seeing a green light ahead, I remember tucking my head on his back, and looking right at the park we were driving past. The next thing I remember was the noise. Tires screeching, a thumping noise, and a quiet rush wind with an obvious void of the hum of a motorcycle. Then my body hit the ground. I was on my stomach facing the direction we had come from, sliding backwards down the road with my arms in front of me. I started to push myself up to stop myself when I saw the motorcycle I had been on just seconds before sliding towards me. I tucked my head and arms into my body. Then everything stopped.

I rolled over. I breathed. I laid on my back with a prayer in my head. “Oh God, Oh God, Oh God.” echoed over and over in my helmet. “Can I wiggle my toes?” I thought. I could, but not much else. I lifted my head and looked for boyfriend. I called his name and he answered. We were alive. I could smell the oil and gasoline that was leaking from the chunk of metal that was just above my head. I was missing a shoe and my jeans were shredded, exposing most of my legs. Soon there was a shirtless man standing over me asking if I was ok. His friends were calling 911 he told me. I tried to sit up but my legs felt like jello. So I laid back down. A few minutes passed and then I heard the sirens in the distance. I was alive and they were coming to peel my body from the tar. 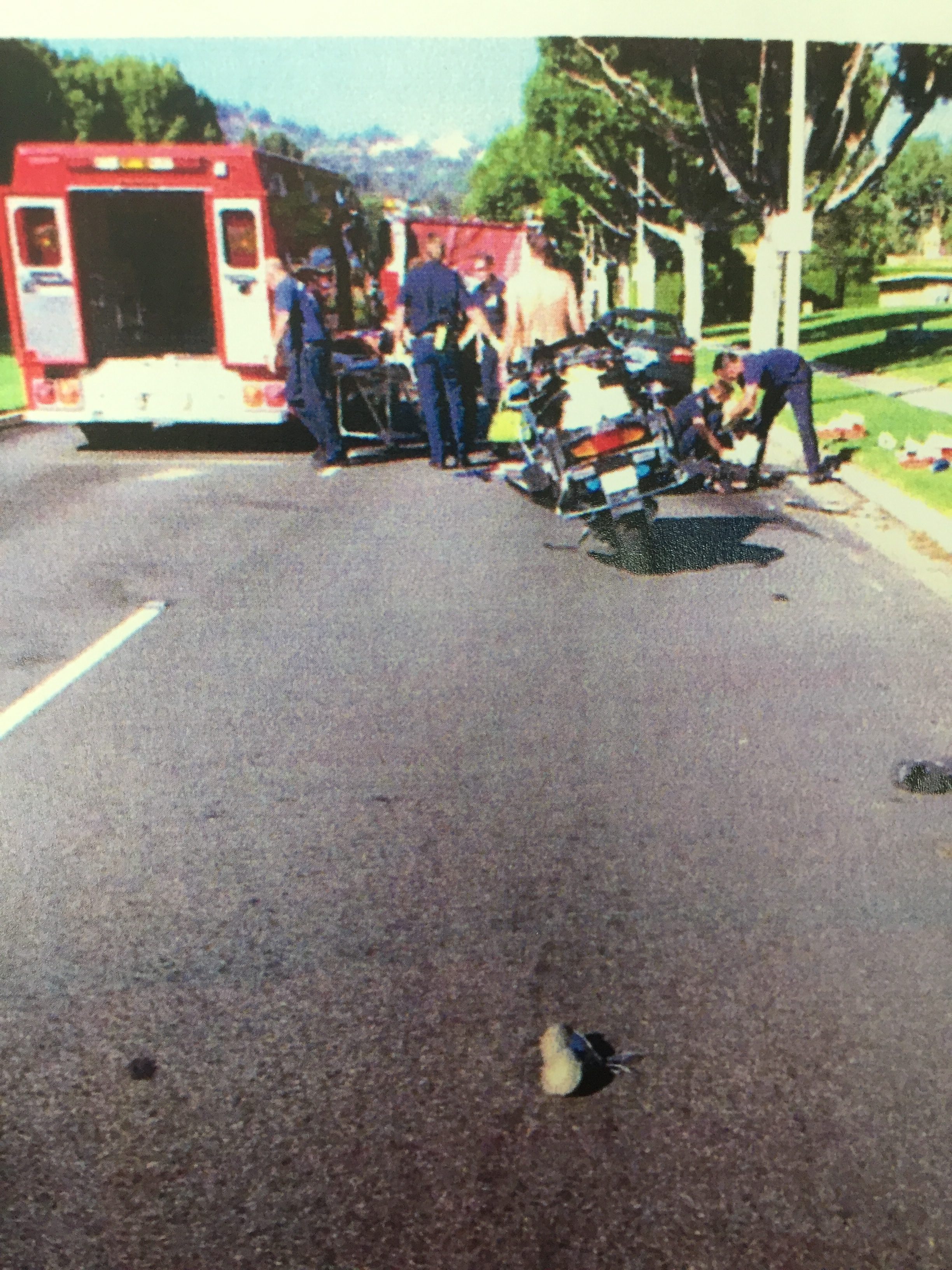 I didn’t know what happened until the police officer came to the hospital to question me. I thought he just lost control and hit the curb. I didn’t see the Ford Explorer that made a left hand turn in front of us at the light. It turns out, he didn’t see us either. Nor was he going to stop. He drove another block before a passenger he was giving a “Hollywood homes” tour to made him pull over. My left Teva left a blue skid mark on his front bumper just before the foot peg caught the left front headlight and threw everything off balance.

I had a shattered left patella, a broken bone in my foot, and road rash covering both arms and legs and part of my side. Boyfriend was going into surgery to save his foot that the motorcycle had mangled when it came back after us. He would end up staying for several days after hours long surgeries. I stayed mostly in a hallway in the crowded ER. I listened to a woman screaming in agony until I had to close my ears and sing to myself. She had been cliff jumping, landed in too shallow water, and had broken both of her legs. A nurse dialed my parents’ long distance number from her cell phone and gave it to me when it started ringing. My mom answered, as usual. “Mom, I’m ok, but I’m in the hospital. I’ve been in an accident.” I can only now begin to imagine what those words must have done to my mother’s heart.

After a few x rays, shots, bandages, meds, and a leg brace, I was released later that evening to my roommate and her boyfriend who took me back to the 2 bedroom Hollywood apartment we shared with two more roommates.

Although I was fully awake during the entirety of the accident itself, the following days are a blur in my memory. I remember sleeping a lot and hurting every time I breathed. I needed help going to the bathroom because the scabs on my arms and the leg in a brace made it difficult to pull my pants down on my own. But mostly I remember my roommate and close friends who came to care for me and feed me and walk me to the bathroom before my parents made it out to take over. My heart is forever grateful for them.

In the fourteen and a half years since the motorcycle accident, I have struggled with my left knee. It never seemed to fully recover. I have a big gash in my left thigh that for a long time looked like a Grateful Dead skull and lightning bolt tattoo. I have often wondered if there was more damage to my quad that was never fully investigated. There are small, dark pieces of asphalt in my knee and thigh and my husband says when I go up stairs my knee makes the same bone grinding sound that happens when you twist the head off a deer after the hunt. Lovely.

I’ve come to terms with the scars and have mostly recovered from whatever PTSD I might have suffered. I can pass motorcycles while driving and not flinch anymore. I’ve always loathed running so when my PT told me I will probably never run a marathon I did more of a happy dance than cry a river. BUT if I wear shoes with any kind of heel, or try to go dancing (and I love going dancing), or hiking (I also love hiking) I’ll be icing my knee for a week.

Somehow in the fall of 2018 I tore my meniscus. I don’t know how exactly, I just know that one day my knee swelled up and I couldn’t get it to go back down with ice and ibuprofen. An MRI revealed the tear, some other significant degenerative cartilage damage, and the residual arthritis that we knew was under the patella from the motorcycle accident. A cortisone shot helped take the swelling down but the tear needed to be fixed via knee scope.

I had my knee scoped on Thursday. I was nervous – the motorcycle accident had a way of snapping me out of the temporary care-free state I had my first year in Los Angeles and back to the anxiety I’ve otherwise always known – but the procedure went well. I’m in very little pain and I can walk…er, hobble. Hubs is referring to me as The Peg Leg.

This recovery, however, has brought up unexpected emotions and is why I decided it was time to finally tell this part of my story. I laid on my bathroom floor this morning doing the prescribed post-surgery exercises, and cried. I cried because fourteen years ago the hand of God came down and stopped a motorcycle before it came for me. I cried because fourteen years ago I lived after being thrown from a motorcycle but four years ago my niece died while buckled in the middle of the backseat of a car. I cried while I lifted my leg 20 inches off the floor and thought of my co-worker’s step daughter who fell from a barn loft and broke her neck and my cousin’s husband who lost his foot while fighting in Iraq; both of whom have fought so much harder and under much worse circumstances to keep going. I cried because I was all together immensely grateful for this life I’ve been granted AND incredibly frustrated by the small inconveniences of every day life from having a bum knee AND feeling really silly for having such strong emotions about something as simple as a knee scope.

I know there are big words that describe the somewhat cliche emotions that people like me feel in situations like this, but I don’t think I’m really worthy of them. As author Glennon Doyle says, life is “bruitful” and “we can do hard things.” I believe every story is worth sharing for the simple fact that someone might see themselves in it and know they are not alone in their silly bathroom floor pity parties. Writing is a great form of therapy and it seems I may need a bit of therapy at the moment. Anyway, what I’d like the moral of all of this to be is: whatever your battles are, be they but little, or bigger than a Kawasaki Z1000 flying towards your noggin, keep fighting, friends. Everything…EVERY LAST BIT OF IT, is worth it.